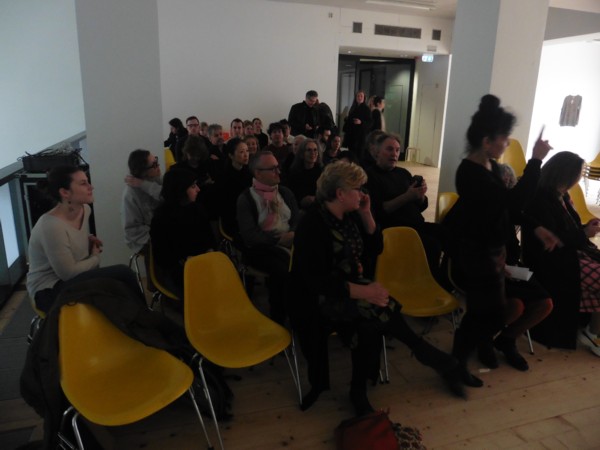 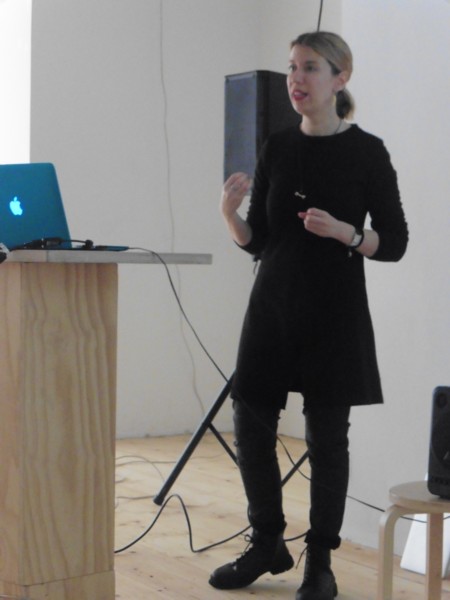 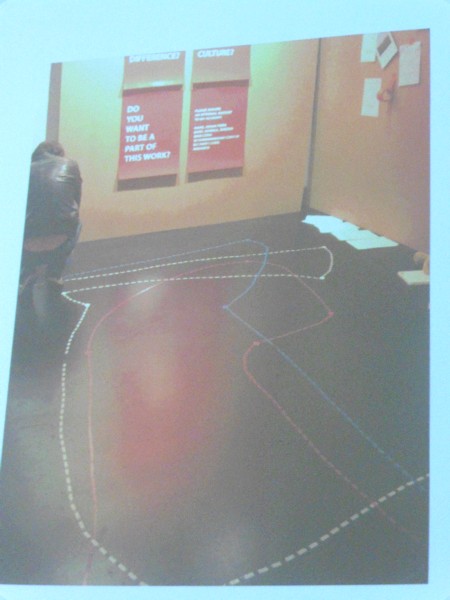 This year again, EX-MÊKH participates in Platforms project in Athens. It takes place in the Nikos Kessanlis-exhibition hall of the Athens School for Fine Arts for the second time after Documenta resided there. Art Athína will not take place this year and during this fair students will show their work in open studios. Expectations are high so we start setting up our installation. We decided to show the individual works of all three of us in one large installation, in perfect equilibrium. In this way we illustrate the way EX-MÊKH has worked for 13 years already: we developed an understanding of each others needs and fortes. Here you will find an impression of the building up: 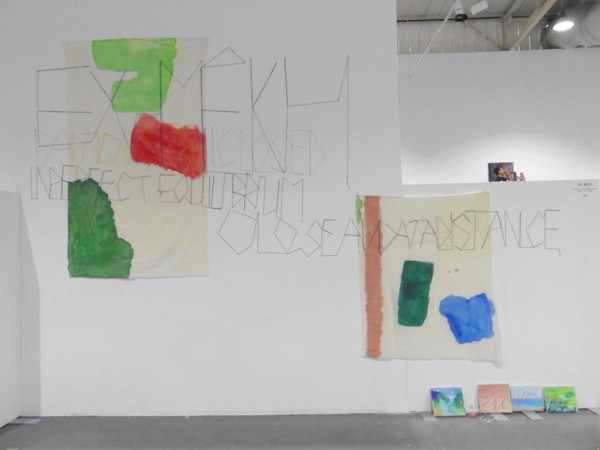 First the backdrop: Ellen Rodenberg’s paintings and a tekst of kees Koomen written over it with wool and buddies. It says: EX-MÊKH – particles enclosed – in perfect equilibrium  – close and at a distance

Then we start adding our work to it

As does maarten Schepers with his sculptures

At night EX-MÊKH is invited by the notorious Topp & Dubio for dinner.

On saturday EX-MÊKH was invited for TALKS@Art Athina. First four platforms were able to introduce themselves and after that we had the opportunity to describe our collaboration with A-Trans from Berlin. It was interesting to hear what other initiatives had to say about their practice, Some were very pragmatic and fast moving and some were very serious and theoretical. Social and political circumstances are having a great influence on the way initiatives function, but motivated artists find their way allways! 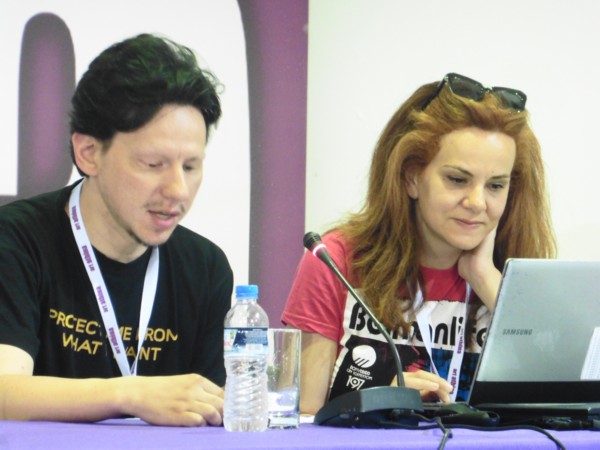 KangarooCourt from Greece made a serious and deliberate statement about their intentions. Their presentation in the booth on the other hand, a performance called Worst Case Scenario, was light and ironical. 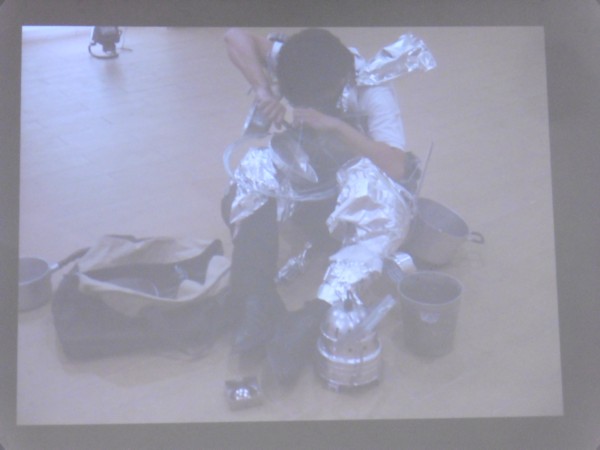 A video from one of their activities

Linda Weiss explained about Scotty Enterprises Berlin. She made an installation of the booth of this initiative in which she worked with a poster she found in Athens to make a statement about “Strategies of the non-stratified: Thinking the outside (Power)” 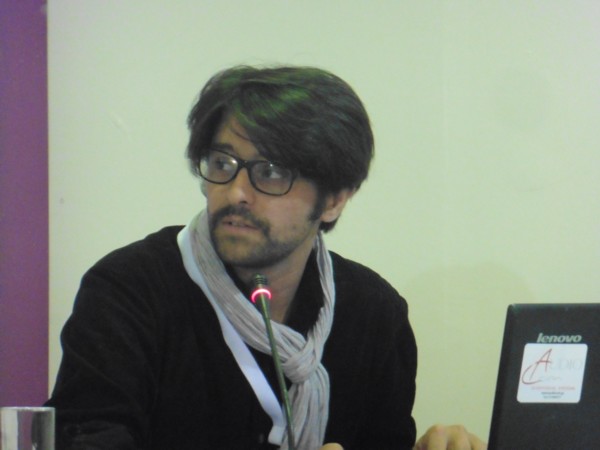 The story of Amrali Ghasemi of Parking Gallery from Iran impressed me: curating exhibitions in Teheran in the garage of his parents he developed a program, constantly reacting on different kinds of pressure he continued by making pragmatic adaptations to the exhibitions.

Petri Saariko from Finland represented Kallio Kunsthalle. Petri likes to work with socially deviant people as could be concluded from the booth of his initiative. Coming from the world of computertechnology it is a great step, but the lively presentations we were happy to experience seem to suggest this is far more satisfactory than the world of ICT.

Then the Collaborative Projects took their place behind the table: Beaston Projects, rosalux and A Brooks Art explained how they organized their very successful presentation at Platforms projects by word of Bella Easton (left), Julia Riddiough (middle) and Tony Domingos 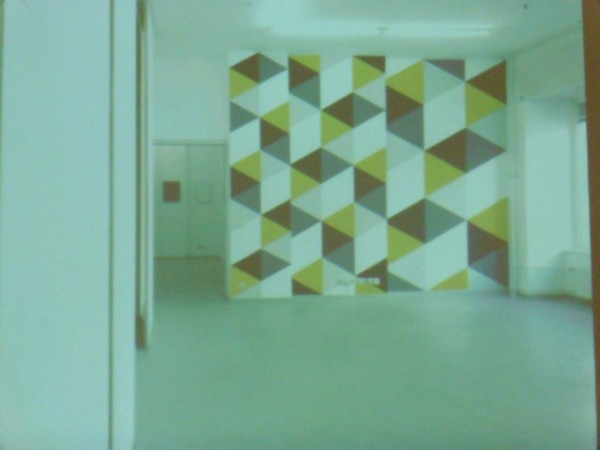 One of the projects at rosalux in Berlin

Peetri Saarikko was very interested in the stories of the artists

Then it was time for Greek artists collaborating: Orizontas Gegonoton and En-Flo that had the large amount of suit-cases around one of the booths. Apparently it was part a a large project that took the artists all over the country.

The last collaborative project was the project under construction of EX-MÊKH and A-Trans. Your humble servant told about the practice of EX-MÊKH and how, during the first Art Athina A-Trans and EX-MÊKH found themselves to be having a similar attitude and  similar interests, which might be the basis for collaboration.

There was quite some public during the talk 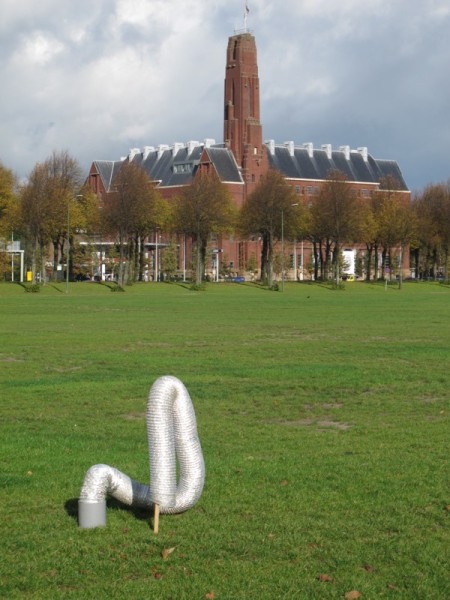 Then I talked about the parallel Malieveld Project the artists of EX-MÊKH were involved in. For example here with a work by Maarten Schepers. The Malieveld is a large public space in Den Haag where artists gather on saturday-mornings to make, present and document works between 11.00 and 12.00 h

EX-MÊKH collaborates with other initiatives as here in Italy with Werkbank, Kunsthalle Eurocentre Lana and Quartair. This is a performance of mine during the opening of the exhibition called Mirror Man 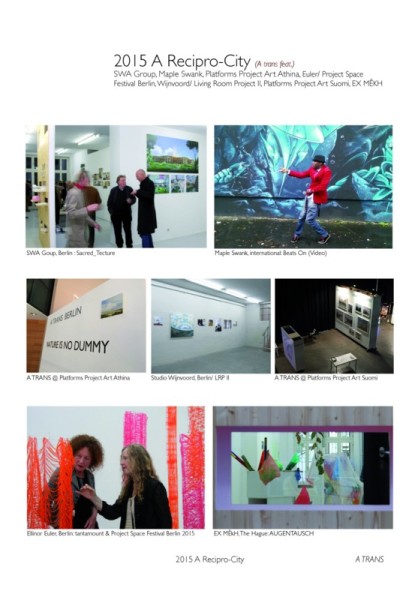 And recently we started to collaborate with A-Trans. We made an exhibition called Augentausch in the space of A-Trans in Berlin, which fitted in the series Recipro-City of A-Trans

During Augentausch we also  did performances. Ellen Rodenberg tries to have visitors collaborate in making art during the opening.

And Marian Wijnvoord, artist with A-Trans, has similar interests. She invades private space with her Living Room Project in which she has her work in peoples living space for three months. This is documented and an exhibition is made of the project later.

At Platforms Project during Art Athina 2016 EX-MÊKH presented it’s installation Framed Divergence, consisting of works by Maarten Schepers, Ellen Rodenberg and Kees Koomen. Images in a cinematographic cave, formed by the light shed by the artists on reality:

View of the booth 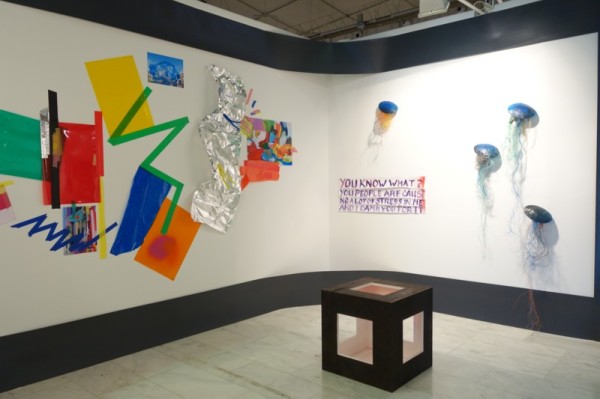 View on right side

view on left side 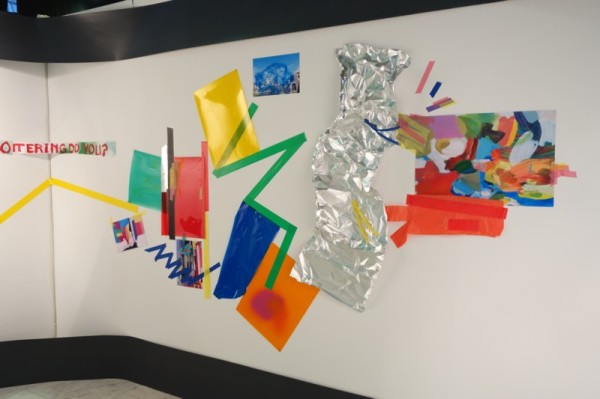 Another view on the right side of the booth

Under – Kees Koomen: Street sounds. Above – Maarten Schepers: No title

Today the fair would open: after some fine-tuning of the booth the insurance people came by and at 15.00 h the press-opening would start. Then, at 17.00 h, the VIP-opening started. Later that evening it would really get crowded, but less than last year, when the VIP-opening and the general opening were combined. Participants in Platform Projects can not sell because here the idealistic initiatives present themselves at an idealistic rate,  lower than the commercial galleries. Reactions and interest were encouraging for EX-MÊKH of whom you can see the works here:

The posters Ben Faydherbe makes for us are better each year as you can see. He is really a secret member of EX-MÊKH! 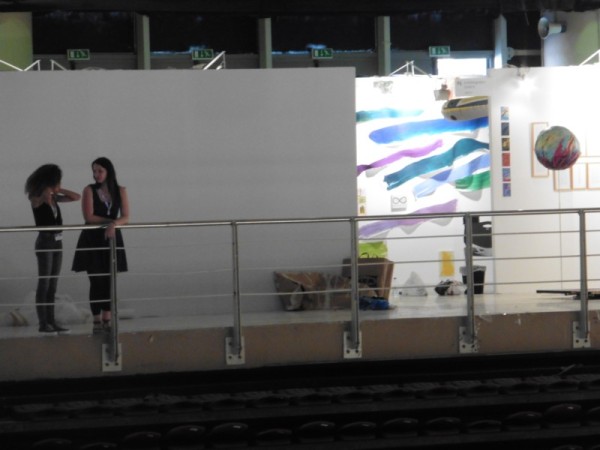 This is an oversight of the booth from one angle 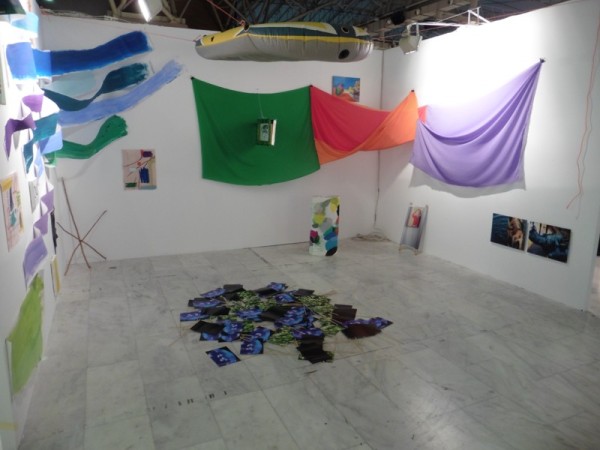 And this is one from another angle

These are details from my work, the Jihadi and the signature (Kees Koomen, KK with one K mirrorred to also refer to the video breathing in-breathin out) were both first shown at the Malieveld-project in Den Haag. 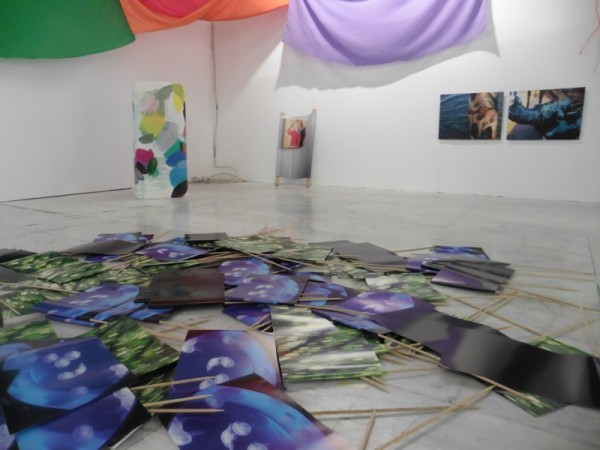 This morning Maarten Schepers added the flags of which any visitor that wanted one could take it with him. The Palette and other work on the background are done by Ellen Rodenberg and the Photographs are by Maarten Schepers 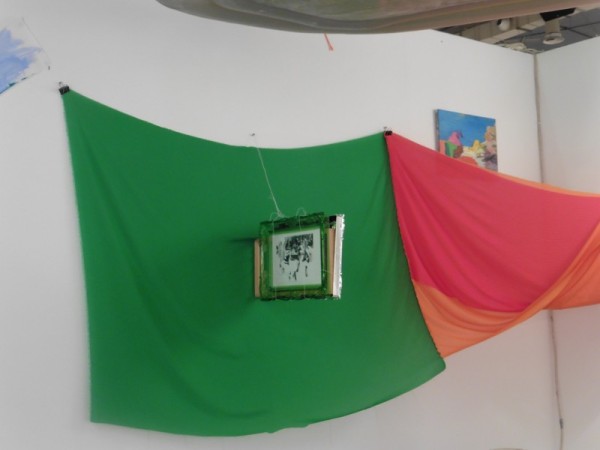 General overview of the booth of EX-MÊKH

Our fourth day in Athens would be the day of truth: would our plans work and would we be able to show a coherent image? Everyone of us had been working seperately on his or her part of the EX-MÊKH-presentation, keeping the others informed of what was happening in the studio. Ellen Rodenberg was not present but she gave us precise information on how her contribution should be installed. We decided on a working order and off we were!

The empty booth and our work in suitcases

First the centre of it all: a rubber boat, put up as if it were a ceiling. Maarten Schepers main contribution.

Some very meticulous positioning was needed.

Our lovely assistent was a bit hesitant at first, but she helped us out quite a bit eventually.

And this was the result at the end of the first day. 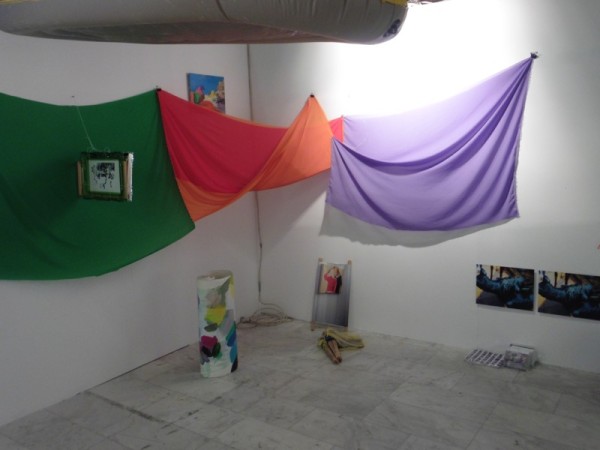 The flags are Ellen Rodenbergs, so are the drawings on it and the painting behind it. The photographs are done by Maarten Schepers 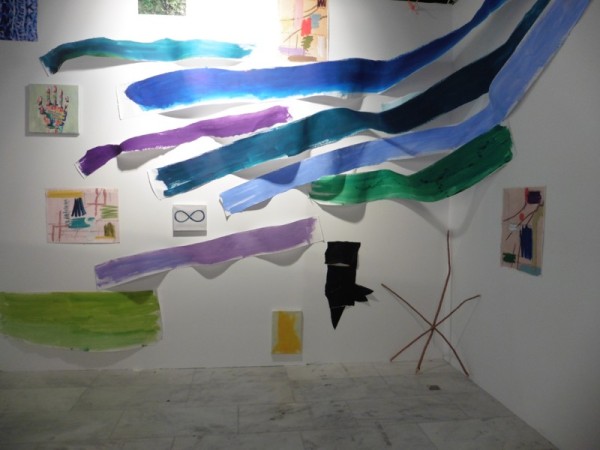 This work is done by your correspondent

Another view at the beautiful drawings of Ellen Rodenberg 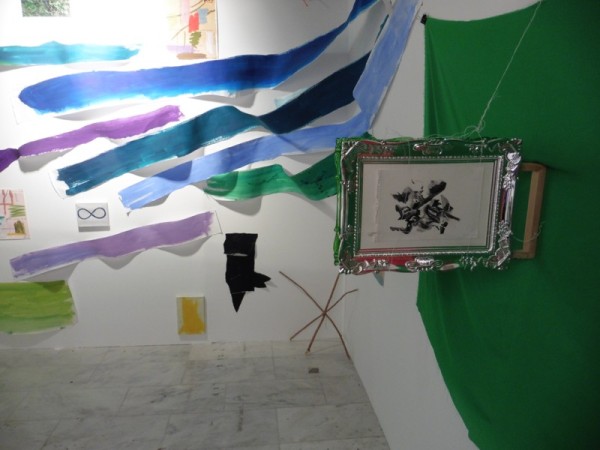 Which were put back to back in one frame

Today we return to Holland satisfied, with many wonderful memories and looking back on a rewarding stay in Athens. I would like to end these posts with a selection of pictures I made of our own booth which was the reason we came: to present the works of EX-MÊKH, Ellen Rodenberg, Maarten Schepers and Kees Koomen and to make friends. 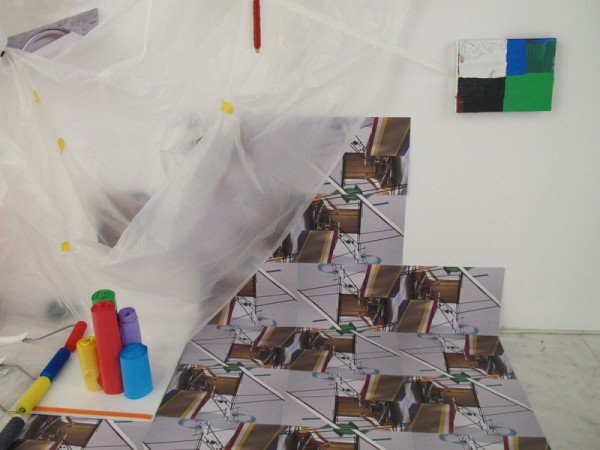 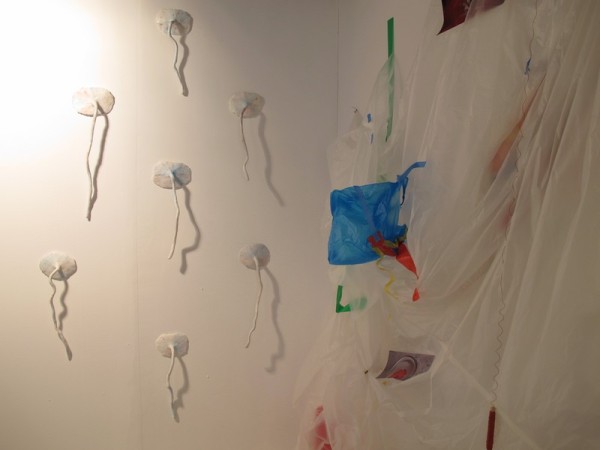 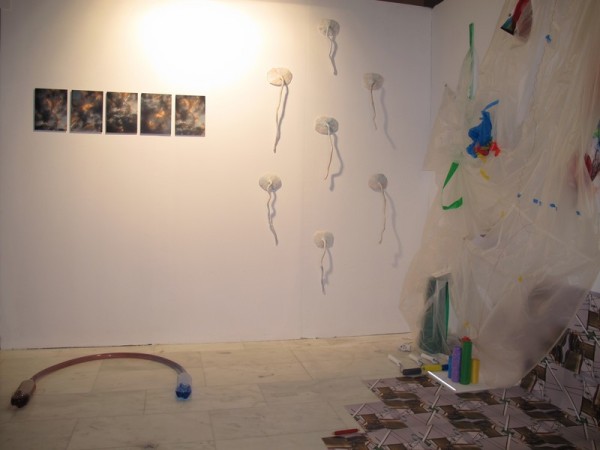 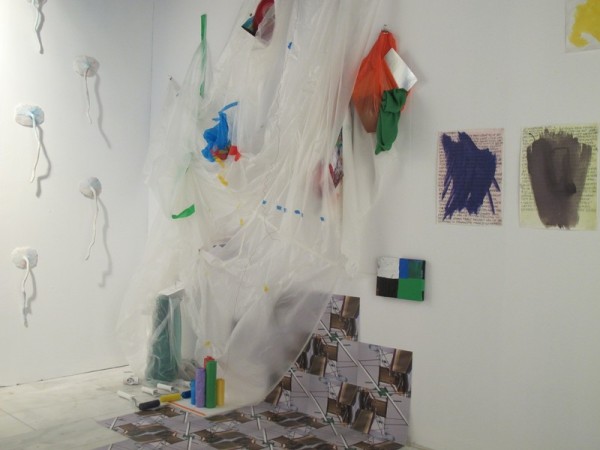 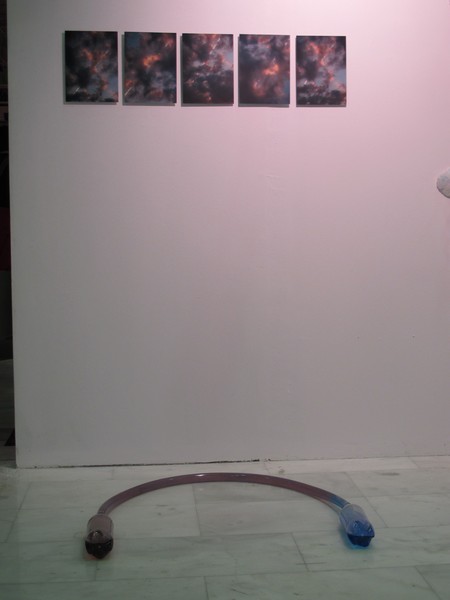 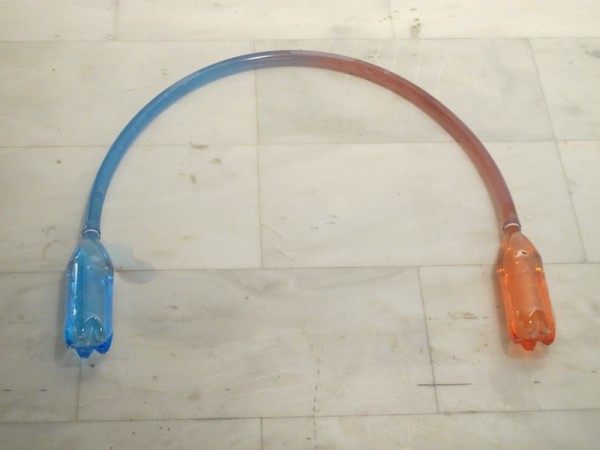 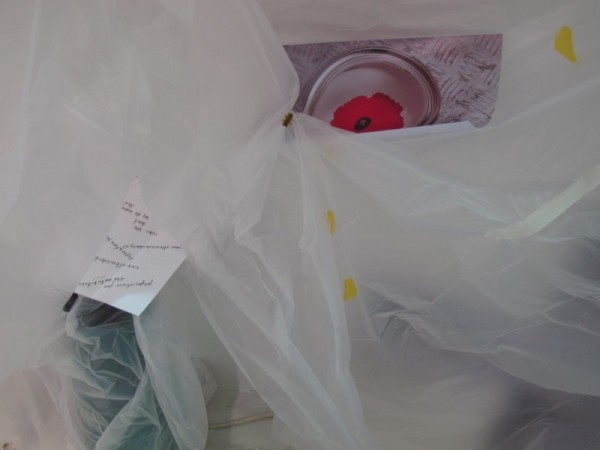 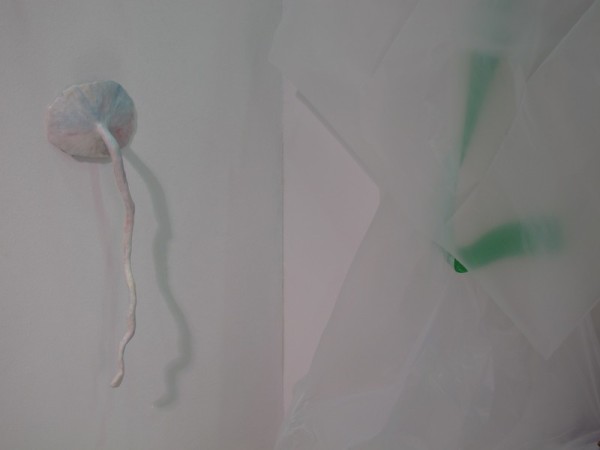 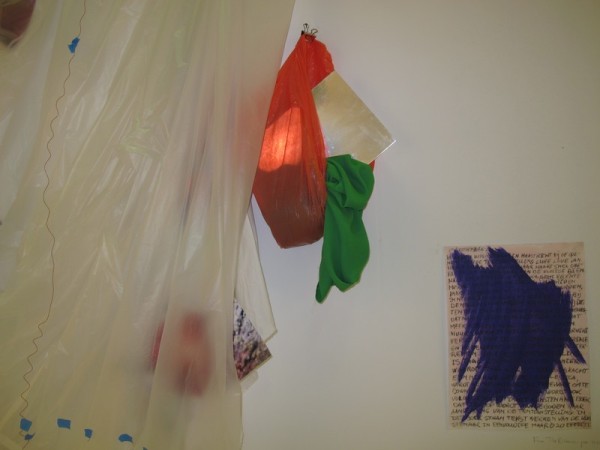 A brief round through the fair to see how things develop:

The REM Brand Name Project is doing very well selling tickets for the lottery , A1 is a nice picture!

The explosion of Speech engages a lot of people it seems!

Lots of stones have been written on 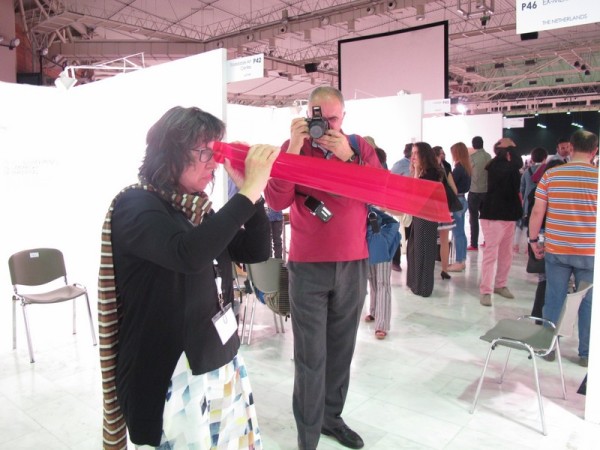 She really gets them goìng!