In spite of the crisis atmosphere in Athens and the refugee-problems that haunt the country the Athens artfair took place again this year. The Taekwondo Stadium had been occupied with refugees in winter during heavy rains which resulted in a lot of problems.  Nevertheless, the fair continued but the big galleries in Greece didn’t show up and the galleries that did show up were very conservative in their choice of artists. The Platform Project on the other hand was very interesting this year. It is always worth to visit but now the side show for non-commercial art platforms showed great art and awareness of the human and the political situation which in some cases led to  moving art works.

Look at the fair from the platforms

Derek Liddington at 8Eleven, a very interesting sculptor. these are studies after an Elsworth Kelly drawing 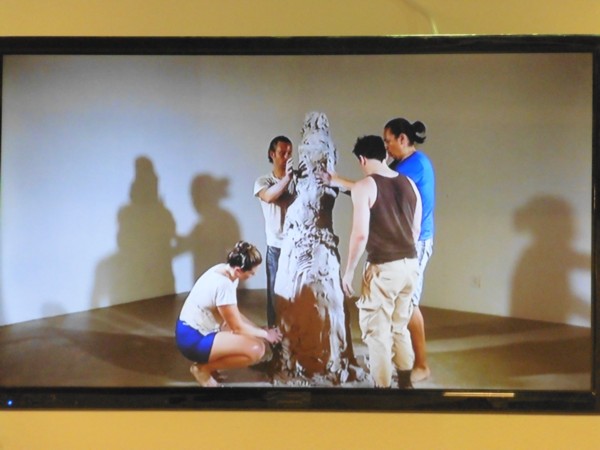 This video was shot by Liddington, having four actors making a pillar of clay and creating a tension between disciplines 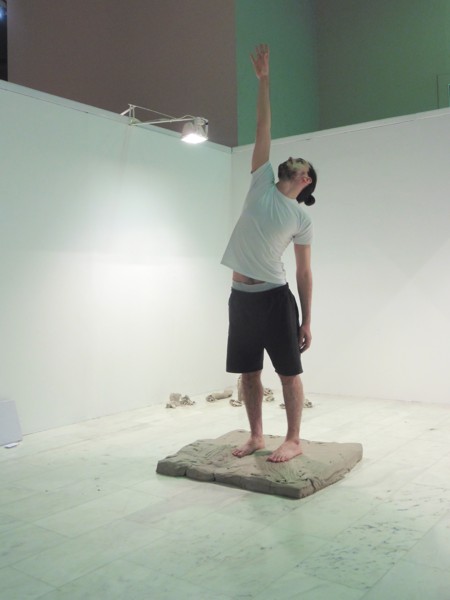 This was an ongoing performance in 8eleven in which a dancer would reenact the choreography “Ode” which was executed by les Ballets Russes in 1913. The floor on which the dancer moved was a square meter of clay 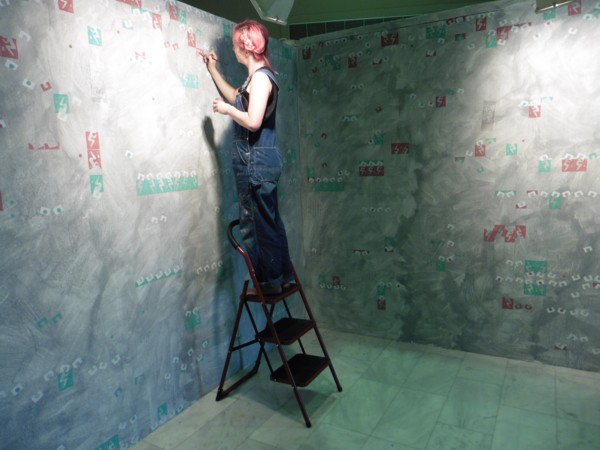 I found this work very moving: in an inter-active work, Navine Khan Dossos tries to paint the 2000 people that have sought refuge in the Taekwondo Stadium last winter. Visitors and colleagues are invited to contribute as the artist will continue to paint until the end of the fair.

This beautiful Painting has been made by an icon-painter for Kallio Kunsthalle (FI), following the text that Petri Saariko had prepared. 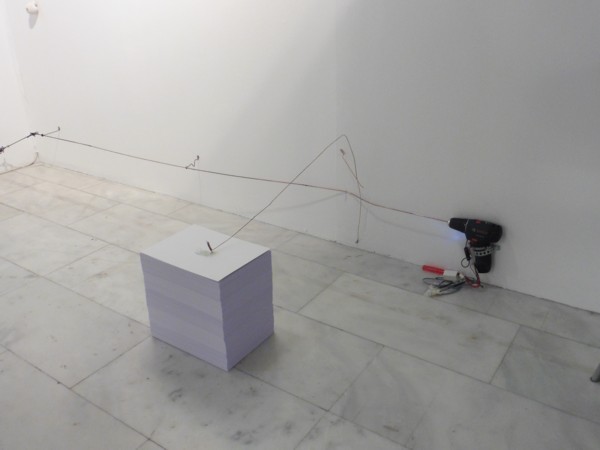 It is continuing to draw during the fair 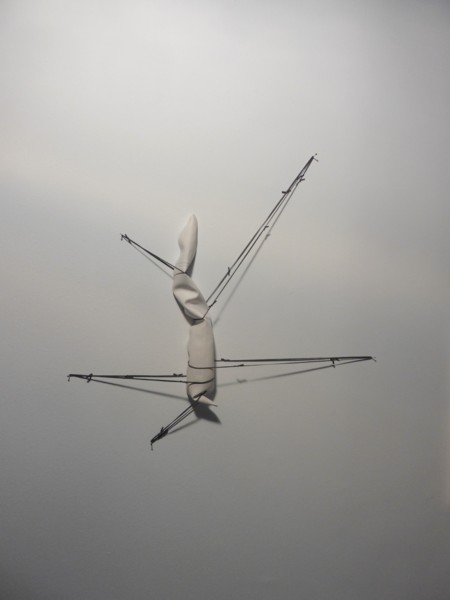 A short visit to the real fair: here a photograph by Sarah Lucas 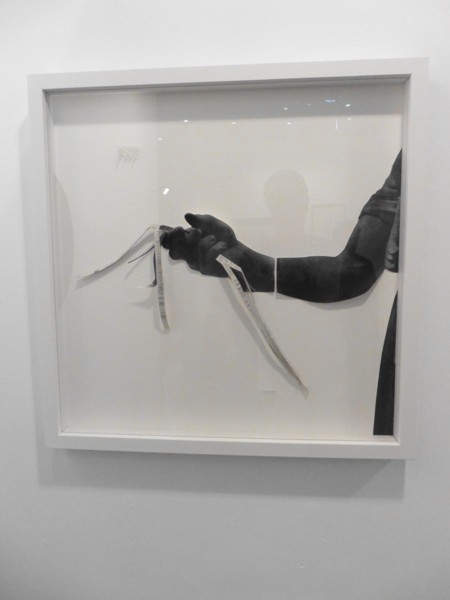 who also made beautiful embroideries on newspaper, shown at Mulier Mulier 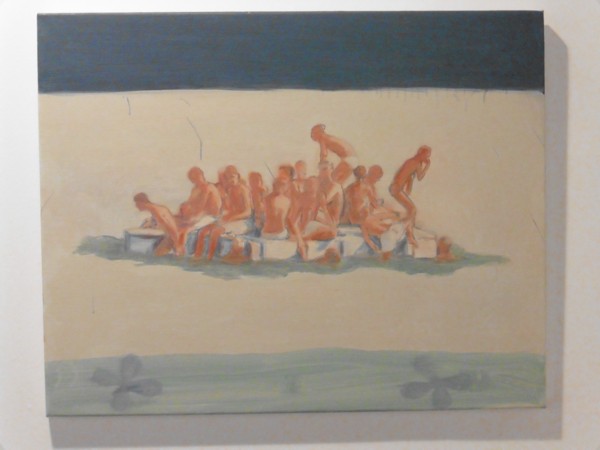 Where also work of the painter Guy van Bossche was shown

I rather liked these collages because of the use of material. made by Nikos Varitymiadis 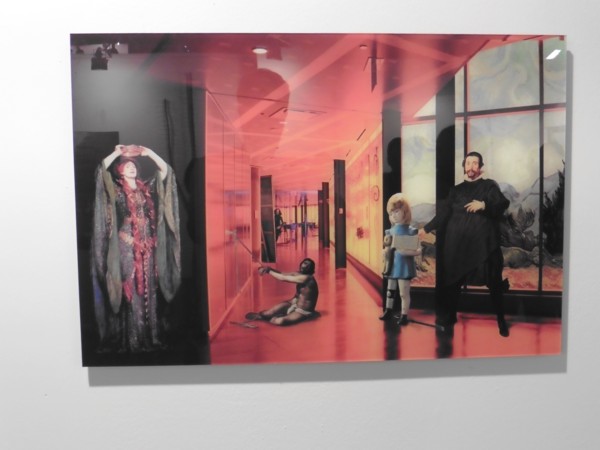 Curator of Platform Projects, the wonderful Artemis Potamianou, an artist also, showed at the floor of the fair

Kallio Kunsthalle showed performance “about the self-determination of women” 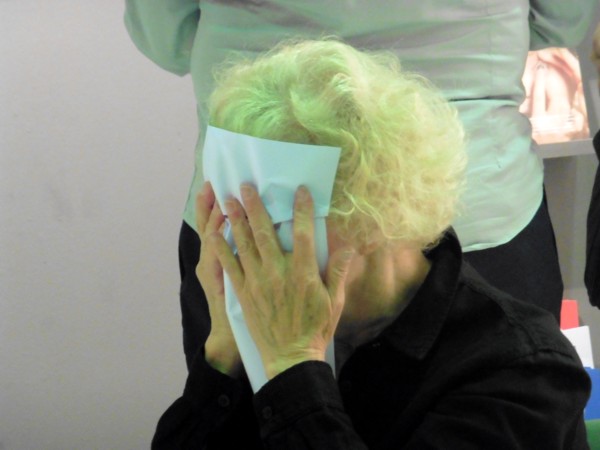 resulting in a beautiful series of personae 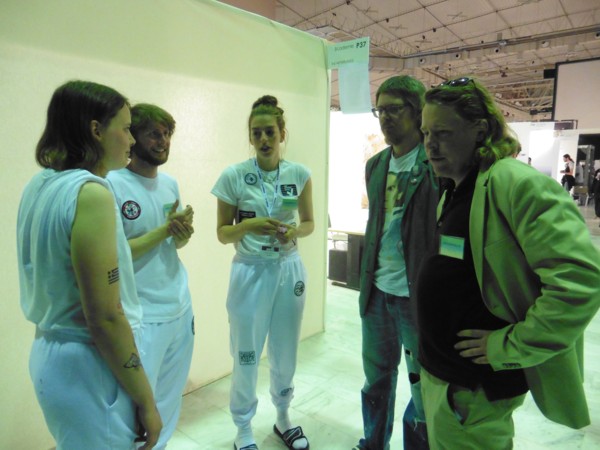 From the Netherlands came Bcademie, a post-graduate training for artists (after A you have to say B). Here initiators Alex Jacobs and Daan den Houter talk with their students, of which six were doïng performances durig the fair. One for a Euro! 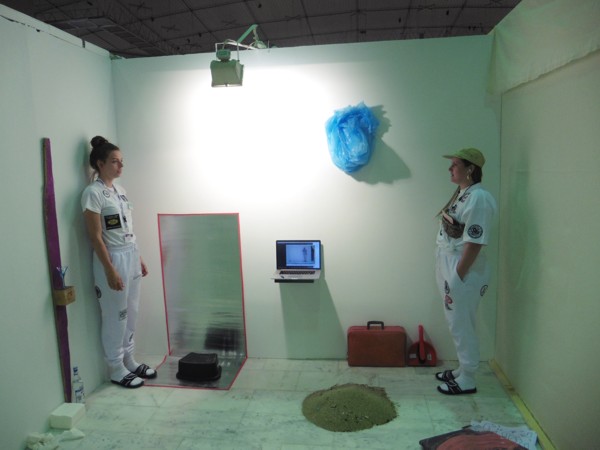 The shift was together with Philippa Driest 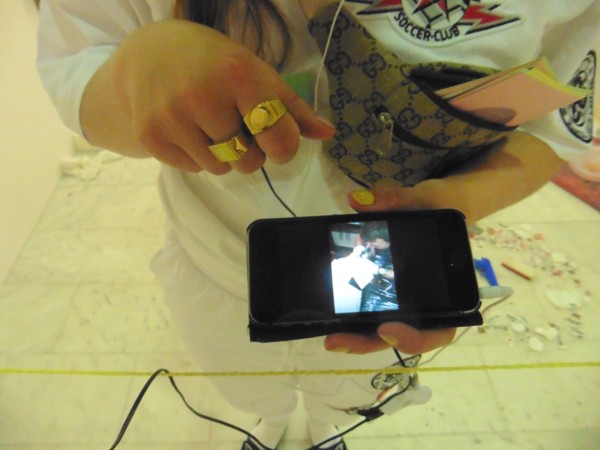 Who showed pictures of urban places accompanied by sounds of airplanes 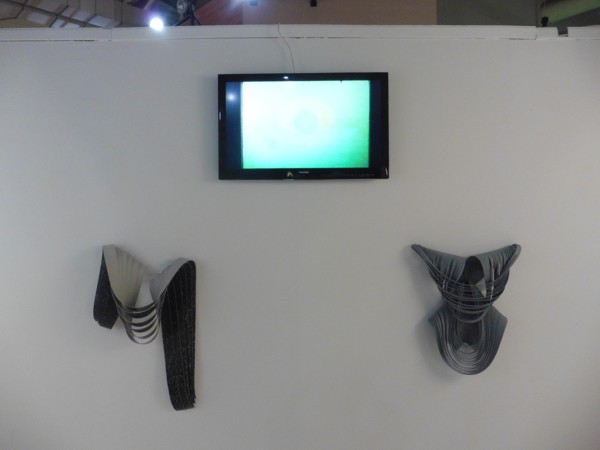 AKA artist run from Saskatchewanm, Canada with sculpture of Svea Ferguson

Which works rather good I think

Then an installation of Amiraly from Parking Gallery/New media Society from Iran, a presentation which is well worked out

Cut the Fence, a project of Copa & Sordes: the 657 meter long fence of a Swiss refugee camp is transformed in to the same length of African damask fabric with fence pattern: everybody who cuts a piece of it contributes to the destruction of the fence

Groupshow at SCI (UK) with very nice works, some fresh from the boats coming to Greece

The beauty of statistics, by Tiny Dominguez 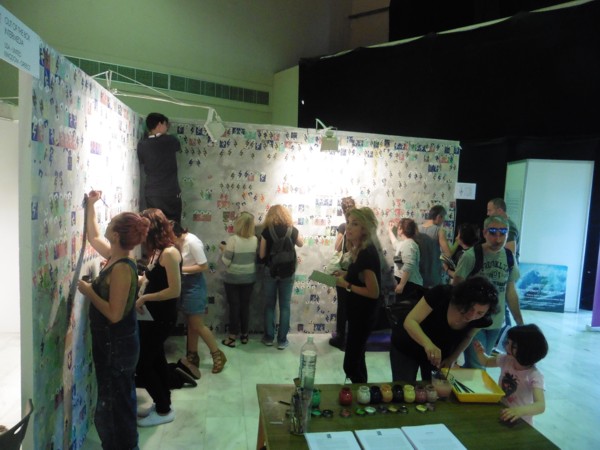 The refugee-camp is turning in a large field of flowers! 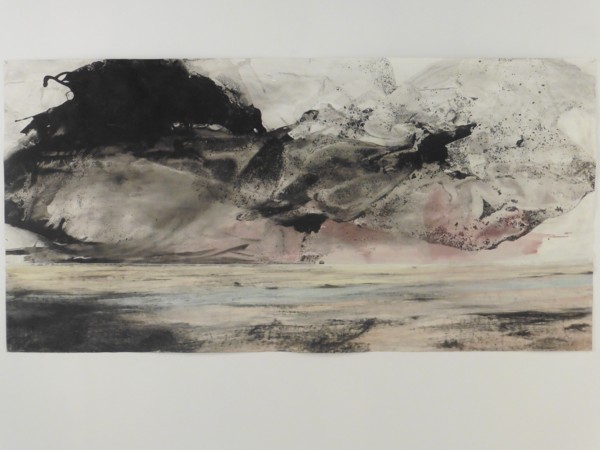 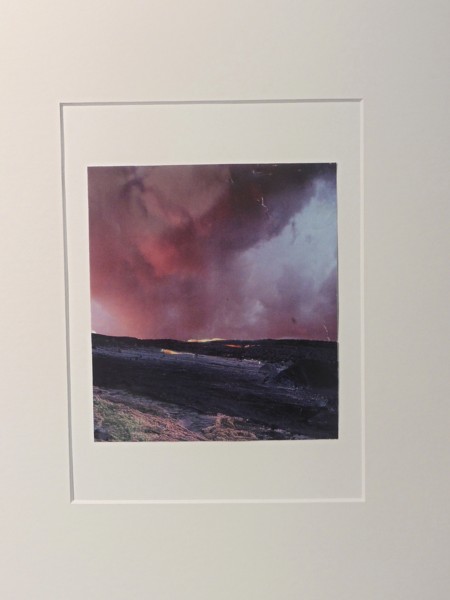 Who also burns down the Netherlands in her Photo-collages

The line in Andreas Martí’s installation is lengthening 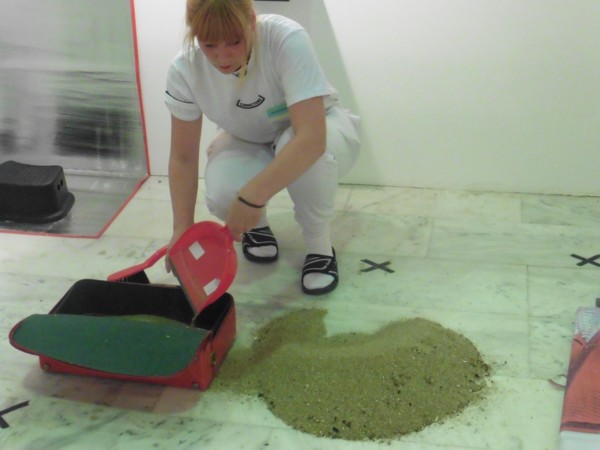 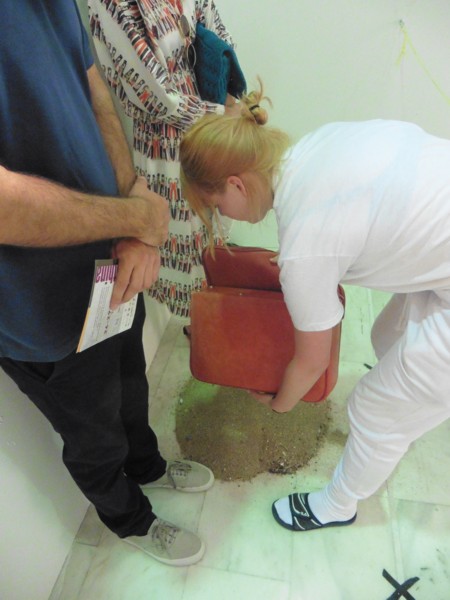 from stage to visitor 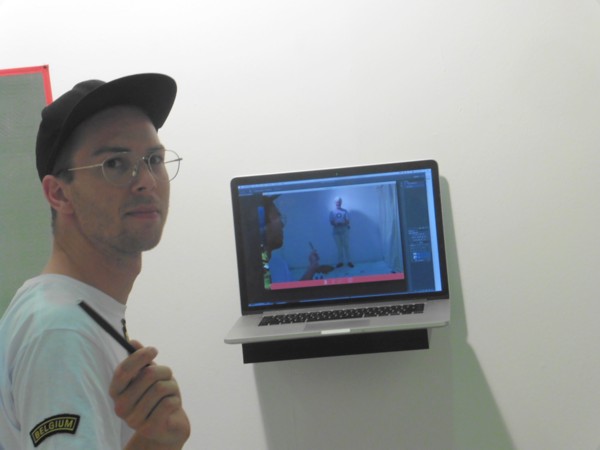 and Casper Braat plans a make-over for your humble reporter 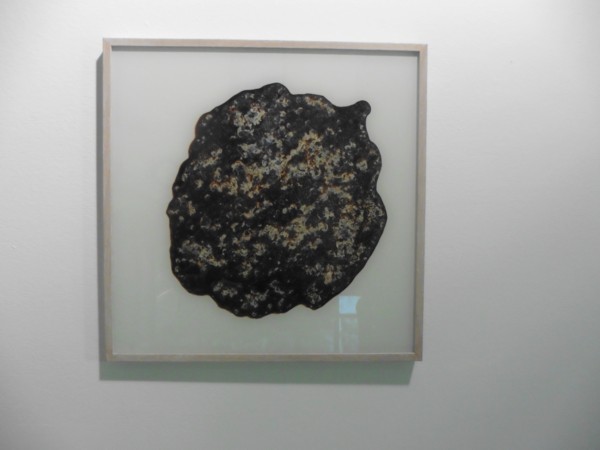 Various Artists from Belgium, a research in shit which Belgians find interesting in general 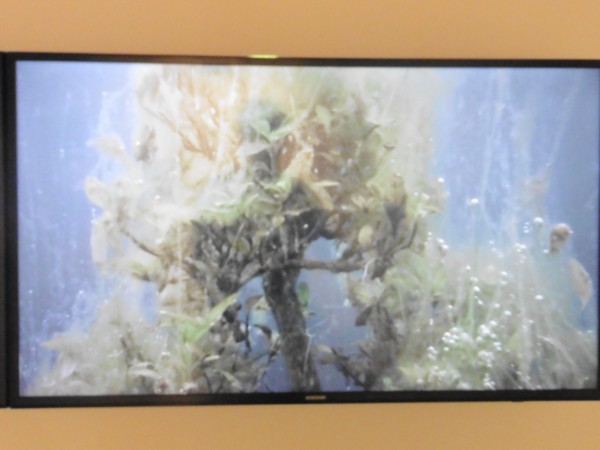 And then there is the very interesting Milena Principle, showing projects that relate to our own activities. Action in public space about silence and slowness. 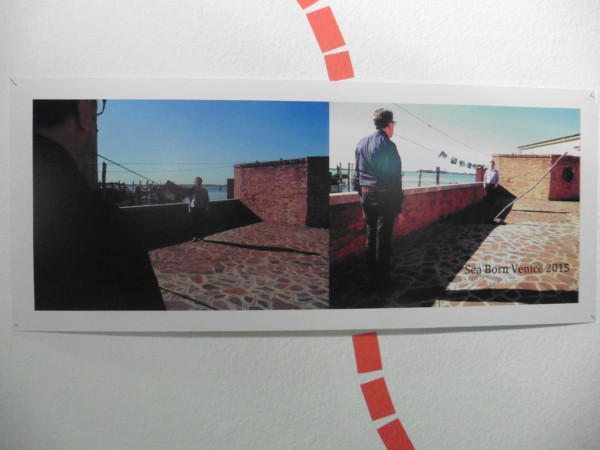 And Athens, we will hear more from them! 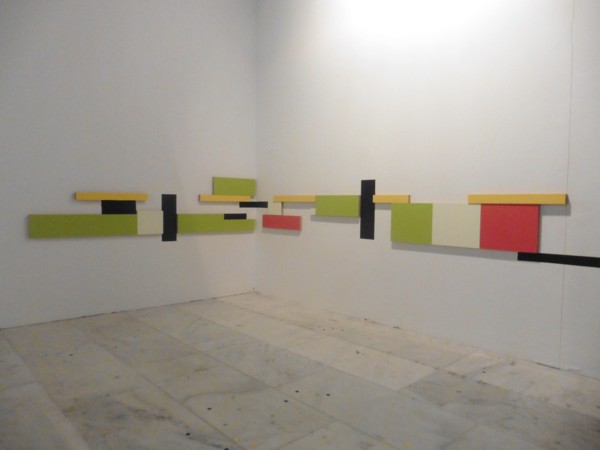 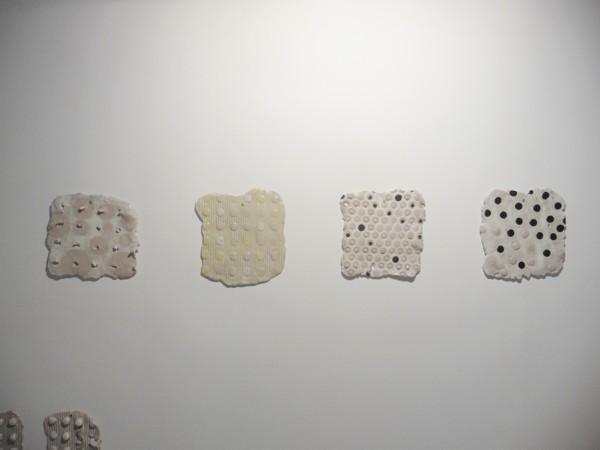 And surprising ceramics by Corine Barendregt